The last column in the table above for Beru showed a decline in the number of people showing up for nutrition programs compared to the second column for the same island.Health data for the remaining 3 islands are not available
A second nutritionist visited the island 2 months later with findings listed in the table below.

Nutrition activities done on the islands:
o    Awareness on child health, NCD,  the importance and the nutrition values of fruits and green leaves and vegetables especially local ones and  portion size.
o    Weight checking for community members that are coming,  I did a counseling with those are underweight, overweight and obese.
The next round of this nutrition campaign program has started and have started off on Abemama Island where the team consist of an ALD representative together with nutritionist and Component 2 manager implementing the program targeting women.
The existing women structures on the island are the focus with a strong emphasis on the application of the concept of the consumption of locally available edible leafy crops which are more nutritious, easy to grow and quite abundant on the island.
Conversely, the value of these traditional crops are shadowed by the popularity of imported vegetables which are believed to be of low nutritional value. The associated traditional beliefs and ideologies on eating greens and leaves may be a factor that influences the choice people made on this traditional crops. In the local traditional context of eating leaves, leaves are normally a diet of pigs which can explain why people choose to take the pain to grow imported vegetables which are difficult to grow under the local environmental condition.
The ACIAR has identified a list of nutritious local leafy crops which are now promoted by OIFWP to be part of the diet. The list of some of these local leafy vegetables is listed in a table below;

The above list will be compiled in collaboration with ACIAR for a reference to be used in the promotion campaign program.
Media campaign complements efforts on the ground. This media campaign was carried out by the Communication and Knowledge Management Officer who through radio and media programs informing the public of the OIFWP nutrition program as well as promotions of the consumption of healthy diets. The following are activities undertaken during this reporting period;
Recorded nutrition awareness campaign prepared by the project and played over the radio on a monthly basis in a drama form. The same nutrition information was repeated for a week with questionnaires answered at the end of the 5-7 minutes duration of the play each day.
Listeners who tuned in for the programs rang in to the radio station to answer questions ranging from project identification, nutritional questions on the functions of vitamins, home gardening questions on plants and many others.
The duration of the program played each day was 45 minutes.
The second kind of nutrition awareness program was the sponsoring of ‘News Bulletin’ by the project. The radio program involved home gardening related activities catering for a balanced diet, water-related activities and community news.
The radio awareness program was played 6 times a day running continuously for 6 days a week.
Press releases were also sent to the media in the form of radio news and newspapers:
Listed below are some of the radio program, drama and related news promoting nutrition and project activities:
Nutrition information were relayed in the pre-recorded radio programs. Information were based on expectant mothers, which foods are best for them, nursing mothers, 6-month old baby when they start their first meal.
As mentioned earlier in this report, nutrition awareness campaign started off from home gardening. A balanced-diet needs all sorts of different plants for their leaves, tubers, corms and fruits, and other plants such as breadfruit tree, Fictustectonius, morinda, coconut trees and whatever was available nutritionally.
Compost making was also shared with leaflets distributed to communities and broadcasted.
The information was shared in the nutrition campaign and also shared to people with Non-Communicable Diseases including heart-related cases. 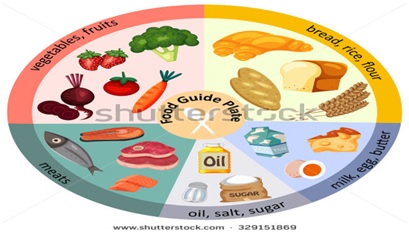 An example (above) of a nutrition poster depicting different kind of foods as a training guide.

Training materials such as posters on locally available foods on nutrition education were shared and distributed to participants composed mainly of mothers who attended cooking demonstration sessions.
The first cooking demonstration was for 6months to 5-year olds while the second demonstration was cooking for the Non-Communicable Diseases.
Local edible leafy plants with a high proportion of vitamins and minerals such as hedge panax (Polysciusspp), Cordia subcordia,chaya(Cnidoscolusaconitifolius), drumstick (Moringaoleifera), beach cowpea (Vigna marina), and Pseuderanthemumwhartonianum were used as ingredients for both cooking demonstrations.
Coconut cream was used as substitute for cooking oils and both recipes were sugar and salt free.