Over three-hundred kind of food crops are successfully grown inside four giant taro pit that have lain fallow for years. The giant taro pit has been remodelled using terracing methods to plant other food crops using a small piece of land. Barenaba Itaia, one of many active farmers whose interests in giant taro cultivation had extended to other food crop planting had remodelled his 4 giant taro pits by planting giant taro and kangkong (Ipomoea aquatica) down at the water level, taro plants on a muddy bank. On the first terrace he plants Ceylon spinach, the second terrace up is covered with bananas and papayas, followed by kumara patch and on the ground level you could find drumsticks, breadfruits, chaya (Cnidoscolus aconitifolius), iamaii, iaroo (Pseuderanthemum whartonianum), seeded and non-seeded breadfruit trees.

Around Barenaba’s home are patches of kumara and pumpkins. Barenaba Itaia left his home island of Nonouti as a young boy to attend a Catholic Secondary School in the capital, Tarawa where he met his wife. He accompanied his wife to live at Makin, first island north in the Kiribati Chain. They both shared the same interest in growing and cultivating food crops.

However, in the year 2015, Barenaba took his family, his wife, 2 sons and a daughter to his home island of Nonouti following his absence of 8 years. Arriving home, he found that there were 4 giant taro pits left with not much crops inside. Most of the giant taros did not survive due to the long drought which is only natural to the island’s continuous dry spells.  He saw that the crops will not be enough for his family future needs so he and his wife decided to fill all the four fallow pits and grow more crops.

Meanwhile, Barenaba and his wife, Nei Takatu discussed plans to make a giant taro-terraced model after several visits by KOIFAWP’s Component 2 Manager in 2016 with plans to include planting a variety of food crops in a small area. The couple readily agreed to try out the terraced model using the fallow giant taro pits.

However, faced with no tool, the couple and their two young children aged 9 and 6, struggled on by borrowing shovels, spades and crowbars to make 3-4 ladder-like steps to form terraces. As new settlers to the island, following their relocation from the wife’s home island of Makin, first island north in the Kiribati chain to Barenaba Itaia’s home island of Nonouti in the central Kiribati, his wife made hundred thatched-roofs for the bungalows that they will build for their sleeping house and the other for eating house, kitchen, bathroom and a house sheltering the well-water that they used for all domestic purposes. The well has a house build on it to protect the underground water from evaporation as the island is very hot. He built a wall about 3 ft high to protect it from wandering and stray pigs, dogs, cats and chicken. The wall acted also as a protection against his young children from falling into the well.

Over the years, Barenaba’s family overcome their first and second plans of building a home and introducing a terraced model for unused fallow pits.The family arrived in Nonouti about 2 years since the inception of the project but they joined it immediately aware of the benefits the project will bring. The family have been very active with home gardening from Takatu’s home island of Makin and they were not new to the home gardening activity etc. Giant taro cultivation is daily task at Makin since the giant taro is a staple food that the island people cannot do without and the island always face a lot of rain making it a ideal place for growing food crops. With full support from the project, Barenaba and his family was and is still the best successful household home garden throughout Nonouti and the other 3 original islands.

He became the role model and champ by introducing a terraced model to a fallow pit and planting many kinds of edible crops using terraces as for limited land. The little land used in the terraced model can provide a family with lots of different foods ranging from fruit trees, root crops and leafy vegetables starting from the water lens to the top soil or ground level. For his determination and success back home, Barenaba had been invited to attend workshops in Tarawa where he shared his life experiences starting from hardships to his success in home gardening using unused giant taro pits for terracing models as well as gene bank for varieties of local food crops.His efforts and determination had also given him and his family more hopes in future. His hard labour had paid off by eating various kinds of foods readily available from such a small piece of land that he had remodelled to his family needs.

By island standard, Barenaba is so blessed with so many food crops grown abundantly on his own piece of land. Nonouti Island, like the rest of the Kiribati islands depend largely on imported goods and foods from overseas. Shortage of cargo, especially food is not new to Kiribati when the cargo ship missed its regular visit to Kiribati to bring food supply. He expressed his happiness that saying that IFAD’s KOIFAWP has greatly improved his family’s situation from worse to best. “From what we’ve grown from our limited land space, we never know that there’s been food shortages faced our island. My family have been eating fresh root crops such as taro and giant taro including assortment of fruits and leafy vegetables. I cut toddy for our drinks and I might say that my family have greatly contributed for all our health”, he said with a smile. Up to these days, Barenaba’s family did not stop there but continued growing whatever crop they could lay their hands on and still continued expanding starting to fill empty land space by planting more food crops on it and giving away plants and cuttings to his community to plant.

“Dry spells are a challenge. I have hopes to save as much as I could to buy a solar pump to assist my children to watering young plants,” he added with a grin on his face. 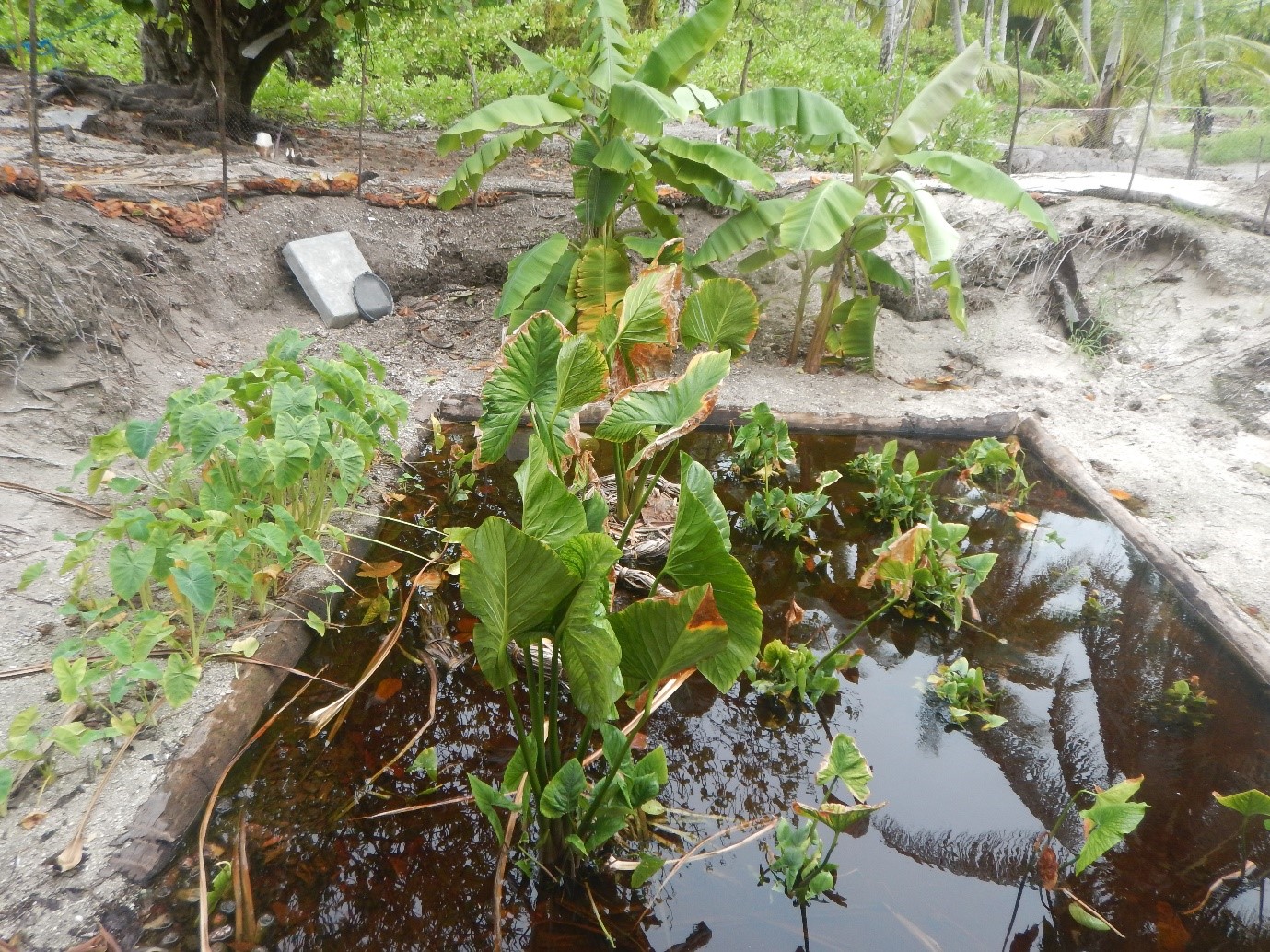 A different kind of terraced giant taro model pit used by another farmer. The pit used to be covered with water (dug to the water lens) but due to famine
and climate change the giant taro pit is completely dry. 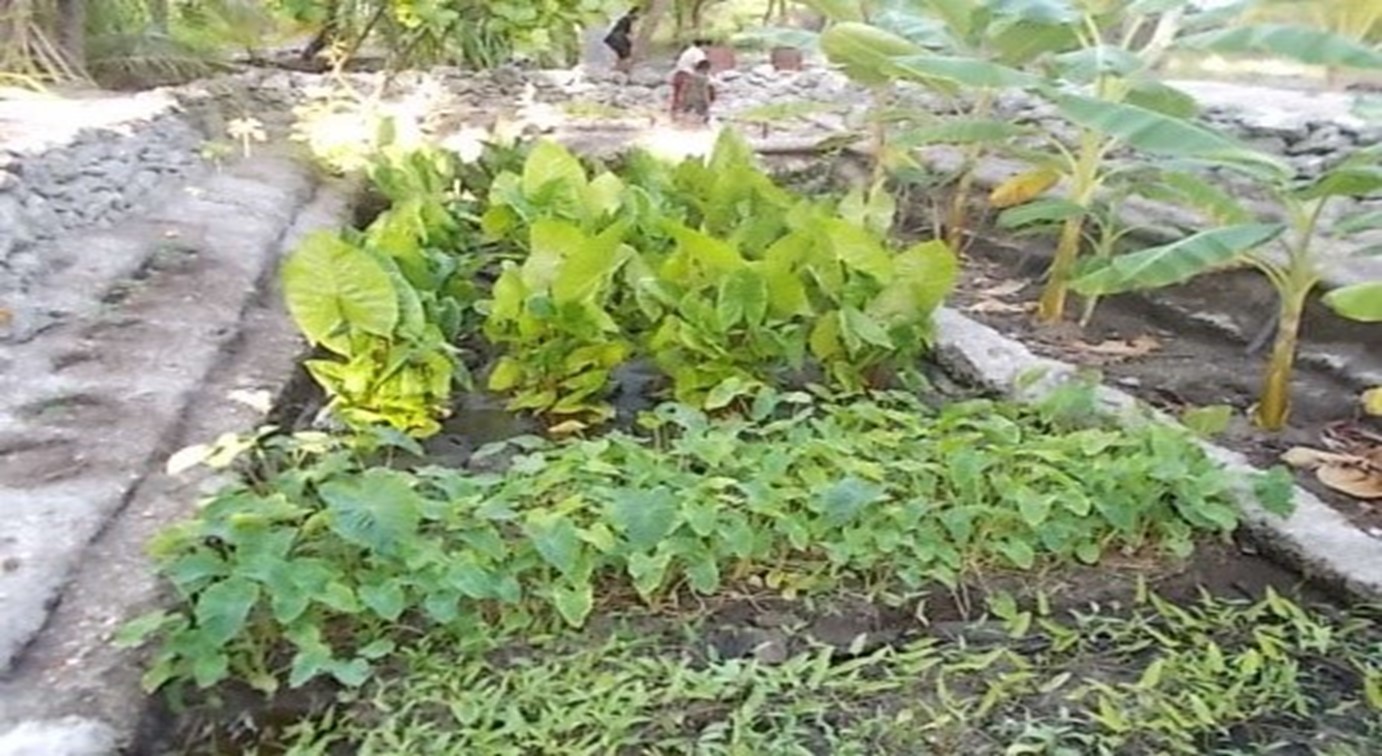 Terraced model applied to giant taro pit by Farmer Barenaba Itaia. Food crops are planned on the above terraces to gound surface where permanent tree
crops are planted such as breadfruit tree, coconut, lemon, pandanus and many more. 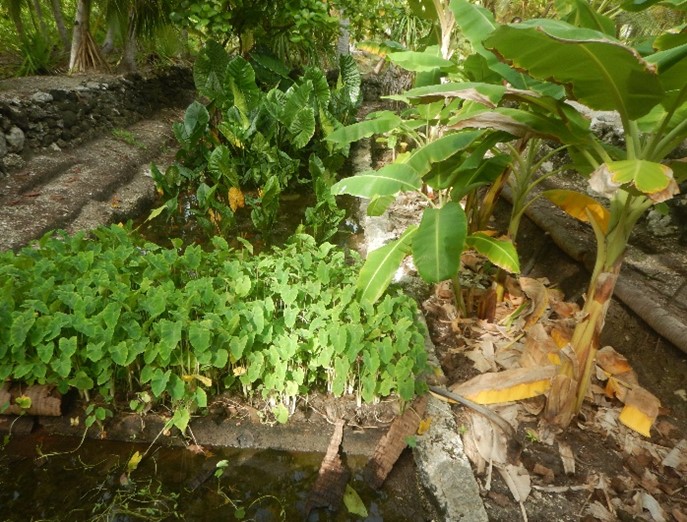 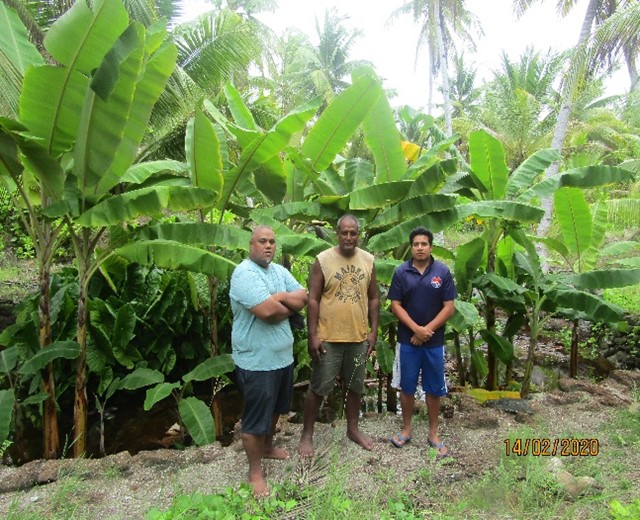 Barenaba Itaia (Centre) with his visitors who have converted four of his fallow giant taro pits to feed his family from year
to year. 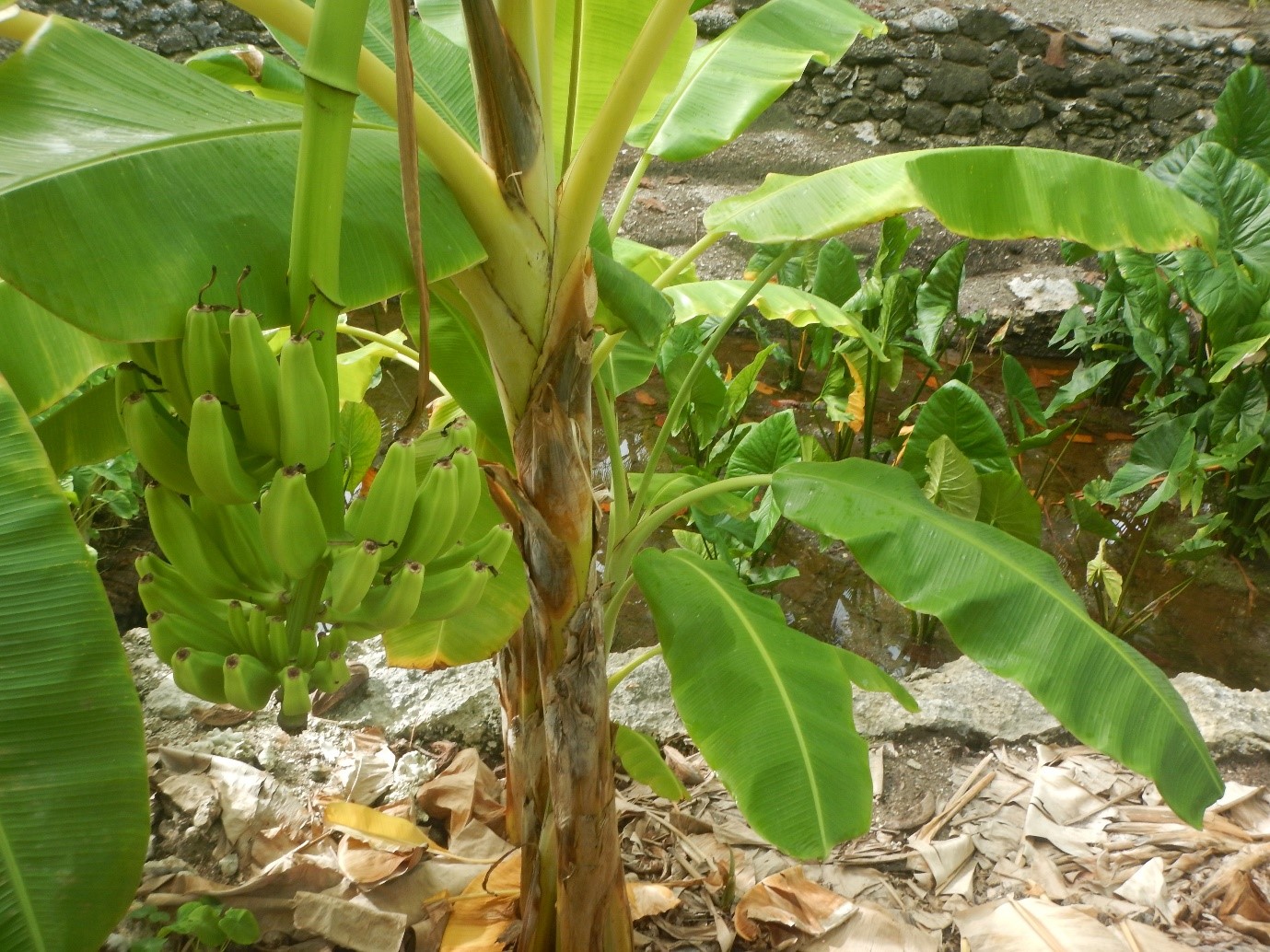 Banana Plant planted on terraces. The fruit is another additional meal to the Itaia's family.