Teeba Tiaree, a 38 years old lady who is originally from Tabiang Beru who is now settling in Abemama because she married to Tekinaiti Teaitau, a 45 years old gentleman from Abamama. They have two daughters aged 8 and 6 years old and one adopted son who is 5 years old.

When the first settled in Abemama, they did not have any crops except one unhealthy breadfruit tree with few coconut trees and a giant swamp taro (Babai) pit. They began working in their babai pit, cultivating young and big swamp taro and planting young coconut trees, continuing what has started by her husband’s father who has passed away. They managed to work on other several babai pits beside what has started by their father.

When KOIFAWP was first introduced in Abemama, Teeba did not see it importance as she thought that the crops introduced do not last for a long time and will be a waste of energy. In 2018, she decided to start gardening and as a competitive person did not what to be defeated by others who have joined the KOIFAWP program and are now have lots of crops around their homes.

Being a competitive and passionate farmer, she decided to do her farming beside her home as she found it very convenient for her as it is very close to her home and can use her solar pump to water them. She prepared her garden pits first and filled it with decomposition, starting with coconut husks at the bottom layer followed by black soil, green manure, iron, decompose leaves, pig manure and liquid fertilizer and the last layer is the black soil. While preparing her garden, she collected her seedlings and cuttings from different agricultural agencies Tioon, Mamarau and Kaeuntaake which are cabbages, Tapioka, banana and cucumber beside what she has started with (babai, breadfruit and coconuts trees) and she planted them straight away when her garden was ready. 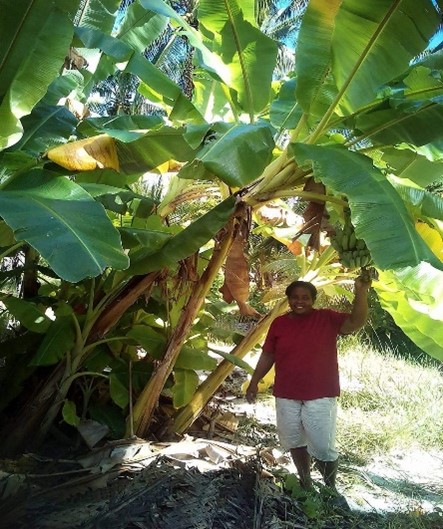 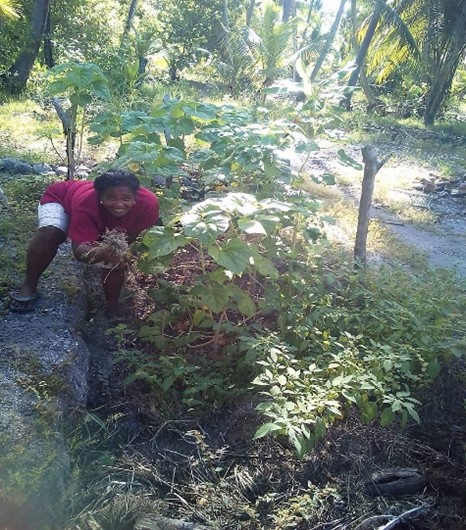 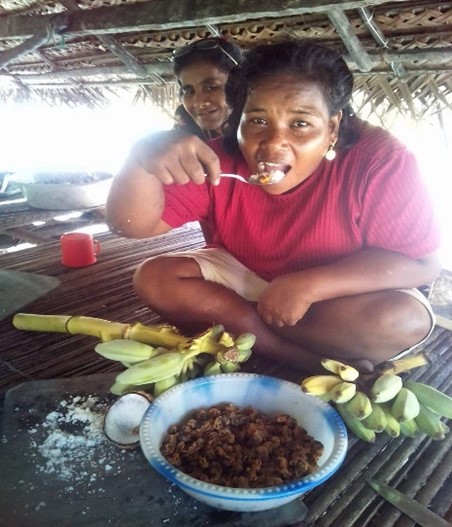 Teeba Tiare holding the fruits of her banana, weeding in her garden and eating what she has planted.

After all she has done, she felt so proud and satisfied and admire the beauty of her garden knowing that she can now have a balance diet and gain income from the surplus of her crops by selling them in their market.  She expressed her gratitude saying that now they are having healthy diet and her children are healthier than before after eating a balance food. Moreover, Teeba is very proud from the product of her hard work as she is having an investment from selling her food product in their market apart from cutting copra. She felt so accountable as she is now able to gain income to the support the needs of her family.