Mr Bwaota Kaririki was awarded in recognition of his outstanding performance on farming and home gardening a Meritorious Services Award during the Kiribati 41st Independence Anniversary on 12th July. Regardless of being disabled, he strives with strong determination towards fulfilling his dream of establishing and sustaining his own garden – an outcome which is considered impossible to achieve given his physical condition, his age and the condition of our harsh environment.

In recognition of his achievement and exceptional performance, Mr Bwaota Kaririki, 72, was given “The Meritorious Services Award”. Bwaota Kaririki lives in a small village in his home island of Beru, one of IFAD’s funded project nine islands. He spent most of lives away from his home land with no formal education but took an interest in carpentry.

Carpentry became his trade and worked for his island’s Local Council, assist in building a house in Fiji for a Tuvaluan Community.  He retired from work at the age of 50 but continued to construct houses on other islands owned by his church.  It was on one of the islands, Abemama, when Bwaota was doing a construction work for the Kiribati Protestant Church (KPC) when he hurt himself.

He was flown to the capital, Tarawa where his left leg was amputated in 2013. Two years later Bwaota was discharged from the hospital and returned to his home island of Beru. He did not rest there but set up his home garden and started planting cash crops such as Chinese and English cabbages, tomatoes, cucumbers, eggplants, Ceylon spinach, sweet potatoes, chili, banana, Chaya, bele (Abelmoschus Manihot). Gardening was not a problem for Bwaota who was once a gardener at the KPC’s High School and an Agriculture Assistant

When the Kiribati Outer Islands Food and Water Project (KOIFAWP) came to his island of Beru in 2014, Bwaota’s home garden was already established, and was already selling out his local produce. He joined the project in 2016 following visits from the project’s Island Facilitator and Community Facilitating Officers who gave him full agricultural support by bringing crops promoted by the project and gardening tools.

Bwaota’s plans paid off. He was able to support his family financially and nutritionally. His gardening needs were procured, his home garden was extended to fit in other crops and seedlings brought with gardening tools by KOIFAWP’s community workers. It was during this time that everyone just started establishing their home gardens that seeds and crops were running out.

Bwaota readily agreed to assist by providing seedlings, cuttings, and seeds while orders were placed to KOIFAWP’s office in Tarawa for more supplies. On field-trainings, advice on how to improve his crops was carried out by visiting him at home by project staff due to his disability. Nowadays, Bwaota is inter-cropping long-term native food crops promoted by IFAD’s funded project (KOIFAWP) for his family consumption with short-term cash crops.

Mr Kaririki’s medal award took 3 years for the project for his commendation to the Office of Te Beretitenti (President’s Office) for his outstanding and determination despite his disability to be recognized nationally. 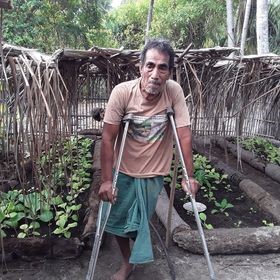 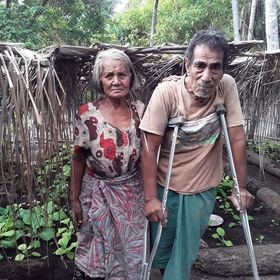 Bwaota Kaririki,(above) and with his wife (below) in his home garden which he has extended to accommodate more native food crops.